Data from Coin360 showed the largest cryptocurrency fluctuating around $8,300 at press time, having made up some of the ground lost during the downturn. BTC/USD spent much of the weekend grinding upwards, reaching local highs of $8,460 before dramatically reversing to bottom out at $8,200 minutes later. Since then, a slow recovery has been underway, paring 50% of the losses.

Binance on its way to challenge BitMEX; who will reign over margin trading platform? [ambcrypto.com]

On one hand, BitMEX has dominion over Bitcoin trading, especially with its famed and proprietary perpetual contract. Binance, on the other hand, rules as one of the top cryptocurrency exchanges in the world with respect to spot trading. Apart from being able to seize the opportunity, Binance has kept itself in the lead by implementing outlandish ideas. It has more than 500 cryptocurrencies listed on its platform. Out-of-the-box thinking has, in a way, kept Binance on the leaderboards.

Congrats on the Testnet Futures launches @binance. Glad to see you enjoyed reading our documentation as much as we enjoyed writing it! pic.twitter.com/lLzcLcX6t4

The forex brokerage giant announced in a press release published on Monday that it is launching CryptoMajor. It is a basket that contains five popular cryptocurrencies – Bitcoin, Ether, XRP, Bitcoin Cash, and Litecoin – in equal proportions. CryptoMajor behaves as a single unit representing the combined value of the said assets. It means FXCM users would be able to collate and offload multiple cryptocurrencies at one go, without the need to manage each one of them independently.

If S/R at $8270s acts as resistance, then I expect price to make its way to previous week's low. Don't fancy other support levels.

BTC bulls are desperately clinging to the $8,400 level right now, but the last few days saw volumes falter once again. The rally back above $8,700 was brief and quickly retreated back into the lower range. The last time BTC moved closer to the psychological $8,000 support, analysts started predicting new possible lows.

Should We Fear The Bitcoin Death Cross? Plus, 0x Price Drivers [cryptobriefing.com]

Cryptocurrency markets are remaining fundamentally similar to last week’s landscape. Few movements were seen this weekend, and Monday so far is not proving to be an exception. As before, Bitcoin remains tightly range-bound, trading around the same $8,300 level of the previous week, while altcoin movements are mostly defined by project-specific news. 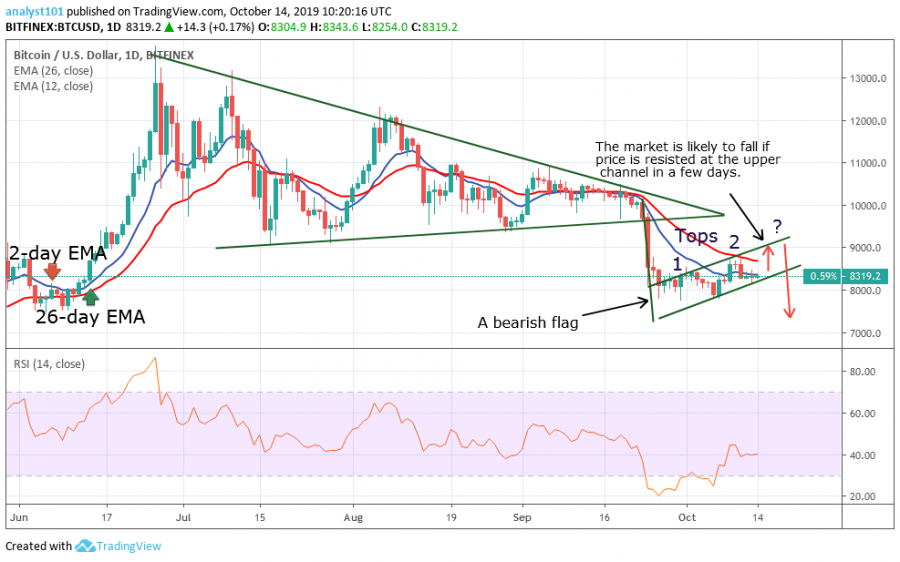 The Bitcoin price is consolidating at the bottom of the chart. The price action is forming a bearish flag from the bearish trend which is a continuation pattern. Now if the price rises to form another top but falls to break the lower channel, the downward move will continue along with the prevailing trend.

This bearish flag pattern will compel Bitcoin to fall and reach a low of $7,300 price level. Nevertheless, if the bulls break the upper channel and price is sustained above $9,000; then our bearish view will be invalidated.

In an interview with The Edge Markets, ICE Vice-President Jennifer Ilkiw said that a larger number of institutional investors are taking interest in trading Bitcoin Futures.
“We have a lot of high-frequency traders who are interested in it. There are also institutional fund managers and brokers calling us to say that they want to trade bitcoin futures,”

Something feels very un-american about this. Two senators writing to Visa, Mastercard, and Stripe to ask them to withdraw from Libra. https://t.co/U3Y7zkuCFB

Brian Armstrong, the CEO of Coinbase, one of the largest cryptocurrency platforms in the world, defended Facebook’s Libra project.
In a recent tweet, he said that it is very un-American what U.S. senators are doing by pressing companies to leave the Libra Association.
“Do we want to have a centrally planned economy, or let 1,000 ideas be tried in a free market to see which ones breakthrough and deliver real value? Breakthroughs are by definition contrarian ideas, otherwise, they would have already been tried.”

The trade of the year is coming once again on $XRP.

Long 2 weeks before Swell, and short when the event is over.

Time to see what this year brings. pic.twitter.com/bW9qKUGv8Y

Many people have always wondered what Ripple Labs CEO Brad Garlinghouse’s position on Bitcoin has been and what his motivations were for developing XRP. He revealed all this and more in crypto evangelist Anthony Pompliano’s Off the chain podcast. The podcast revealed quite a bit of detail about XRP and also showed the mindset of the cryptocurrency innovator.

SpaceX and Bitcoin Both Aiming for the Moon in Q1 2020 [altcoin.media]

It was announced that SpaceX’s new Crew Dragon astronaut capsule will be ready for its first manned flight into orbit in the first quarter of next year. It is a big step for SpaceX — a company that Musk has a 54 percent stake in — and it could spill over to boost Tesla’s stocks. More so, its timing could coincide with Bitcoin’s own predicted increase in value as it becomes 50 percent more scarce by May 2020.

Bitcoin tends to retrace prior to its Halvings

Previously, $BTC saw a -38% retrace prior to Halving 2

Is this current ~40% downside in BTC's price the retrace prior to Halving 3?https://t.co/4StGraQAaQ#Bitcoin #Crypto

The total crypto market cap added $11.3 billion to its value during the last seven days and now stands at around $225 billion. The top 10 currencies are all in green for the same time frame with Binance Coin (BNB) and Ripple’s XRP being the best performers with 20 and 11 percent of gains respectively. By the time of writing bitcoin (BTC) is trading at $8,345 while ether (ETH) dropped to $183. Ripple’s XRP moved up to $0.289

The other negative news included a loss of trust in Facebook’s Libra, after eBay, VISA, MasterCard and others abandoned the Libra Association. Facebook’s Libra was a source of optimism for crypto coins in June and July, suggesting the potential for wider adoption. Right now, BTC hovers just below the $8,400 level with a marginal 2.97% weekly gain. However, despite a few days of relative stability, there are creeping fears beginning to emerge that prices may tank once again.

Bitcoin still up a few % on the week despite the challenging backdrop pic.twitter.com/W7xUbFpCi7

What the Future Holds for Crypto Derivatives [coindoo.com]

The cryptocurrencies market have never been stable, and yet, people still believe it can be the future of our economy. Little by little, businesses all around the world began accepting cryptocurrencies as a legit payment option, including various brick-and-mortar shops and gambling venues the likes of the Slotocash online casino.

Telegram Answers To Investors on SEC Accusations and May Delay Launch [coin360.com]

Two days after the breaking SEC announcement, Telegram developers contacted investors to share views on the matter. On Oct. 11, 2019, the SEC claimed that Telegram’s $1.7B offering was illegal, and the watchdog filed a complaint with the federal district court in Manhattan to halt the Gram token offering. On Oct. 13, the developers wrote a letter to investors assuring that they were “continuing to evaluate the best means by which to resolve the situation in the interests of relevant parties”. The developers do not rule out the possibility that the launch date may be delayed.