Although Bitcoin (BTC) is not showing any trending move, Bakkt and the Chicago Mercantile Exchange (CME) Group continue to roll out products designed to attract the large traders. Bakkt recently announced that it will add a cash-settled futures contract to its existing Bitcoin-settled contract. On the other hand, the CME group plans to offer options on Bitcoin futures after receiving the necessary regulatory approvals. 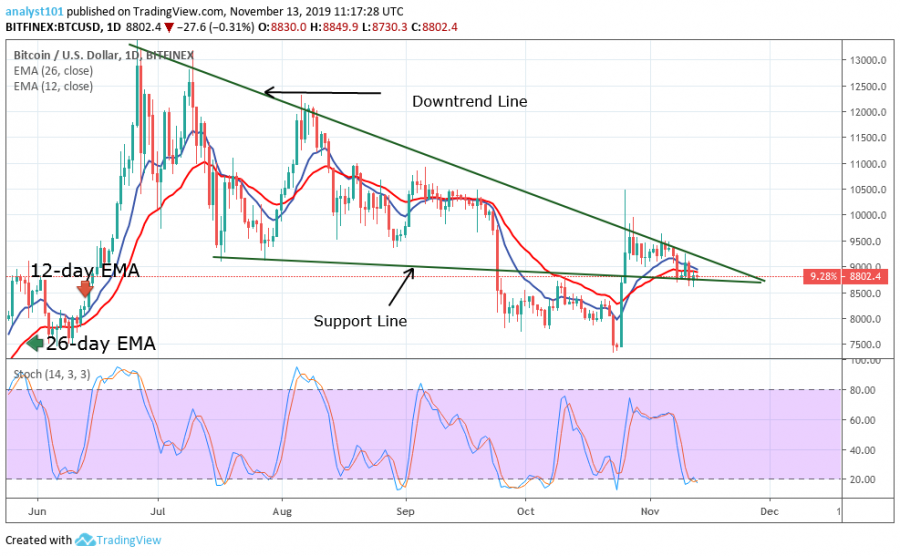 The selling pressure may continue as the downward move may not face any resistance until the coin finds support at $8,000. Today, BTC is consolidating above $8,750 support level which was the previous resistance in May. Bitcoin will fall to a low at $8, 000 if the bears break the current support level. Meanwhile, if the price bounces at this level, BTC will rise to retest the $10,000 price level.

Venture capitalist Tim Draper, an avowed bitcoin bull has always stood with his quarter-million-dollar price prediction for 2023. While speaking during the just-concluded Malta AI & Blockchain Summit, he doubled down on his previous prediction explaining that this high target will be possible because of Bitcoin’s Lightning Network. Tim Draper, the founder of venture capital firm Threshold Ventures, said bitcoin is still on track to being valued at $250,000 by 2022 or 2023.

Bitcoin and Stocks is There a Long Term Correlation [trustnodes.com]

Numerous studies have shown bitcoin is an uncorrelated asset. Yet if we zoom out a bit and consider correlation less as causation and more of a trend direction, the Dow Jones chart and that of bitcoin look a bit interesting. Starting with the Dow Jones chart on monthly candles, we have a ten year long bull run, but also what can be called two lost years.

Ethereum, the second-largest cryptocurrency after Bitcoin, continues to be among the favorites of both investors and developers. It was surpassed by XRP briefly in 2016 and 2018, but other than that, it has steadily held on its second rank on CoinMarketCap’s top cryptocurrencies by market capitalization list. Though 2019 was a sluggish year for the cryptocurrency where it traded at less than 10% of its January 13, 2018 ATH of $1432.88 – reaching a high of only $361.40 on June 26, 2019, the state of affairs is poised to change in the year 2020.

BITCOIN BULL RUN DUE NEXT WEEK ACCORDING TO DIFFICULTY ADJUSTMENT [bitcoinist.com]

Stock-to-Flow (S2F) proponent, PlanB, has been extending his analysis into Bitcoin difficulty adjustments. Predicting an estimated +4% adjustment due next week, following a large drop in difficulty last week, he suggests there is only one way for BTC price to go next.

Bitcoin use will always have its trade-offs: Casa’s Jeremy Welch [ambcrypto.com]

Recently, CEO and Founder of Casa, Jeremy Welch, made an appearance on the Citizen Bitcoin podcast to talk about security, the Lightning Network and the future of Bitcoin. During the podcast, Welch said that phase shifts happen historically, and though we haven’t seen any in a long time, Bitcoin represents something in terms of the next phase shift. He added that there will always be trade-offs to using Bitcoin, both in terms of power and security.

Bitcoin’s Difficulty Falls As Miners Capitulate; Will They Survive the Halving? [ccn.com]

On Monday, bitcoin’s mining difficulty adjusted itself down by 7%, making it easier for miners to solve algorithms, and thus mine blocks. As to why this occurred, it appears to be in conjunction with bitcoin’s recent price drop. Mining difficulty is set to reconfigure itself every 2016 blocks, or roughly every two weeks. Difficulty modulates based on how long it took for miners to discover the previous 2016 blocks. If it takes longer than two weeks, the difficulty is tuned down, and vice versa.

Bitcoin difficulty sees a major drop first time in 2019, abt 7%

Mainly due to price as lower end rig has shut down, partially due to end of raining szn, when cheaper excessive hydro is no longer widely available

Many miners will rekt badly if price does not double in halving pic.twitter.com/2guQvPkoHs

The crypto market first began with the advent of Bitcoin, but in just a decade’s time, thousands upon thousands of alternative crypto assets have been created. Many of these new-age altcoins have performed well for early investors, but the vast majority of crypto assets outside of the top 40 by market cap have little to no liquidity, making them a very poor investment.

Investors want liquidity at entry and liquidity on exit. Very few coins have credible liquidity to be good investments. pic.twitter.com/3kXgn3NWjV

When Bitcoin? Shift From ‘Consumer’ to ‘Institutional’ Puts BTC at the Head of the Crypto Asset Class: Report [dailyhodl.com]

A new report from digital asset management firm CoinShares pulls data from several industry leaders to analyze the big crypto picture. The results show that over the past 10 years since the launch of Bitcoin, the market is transitioning from “consumer” to “institutional”, opening new segments with major players. 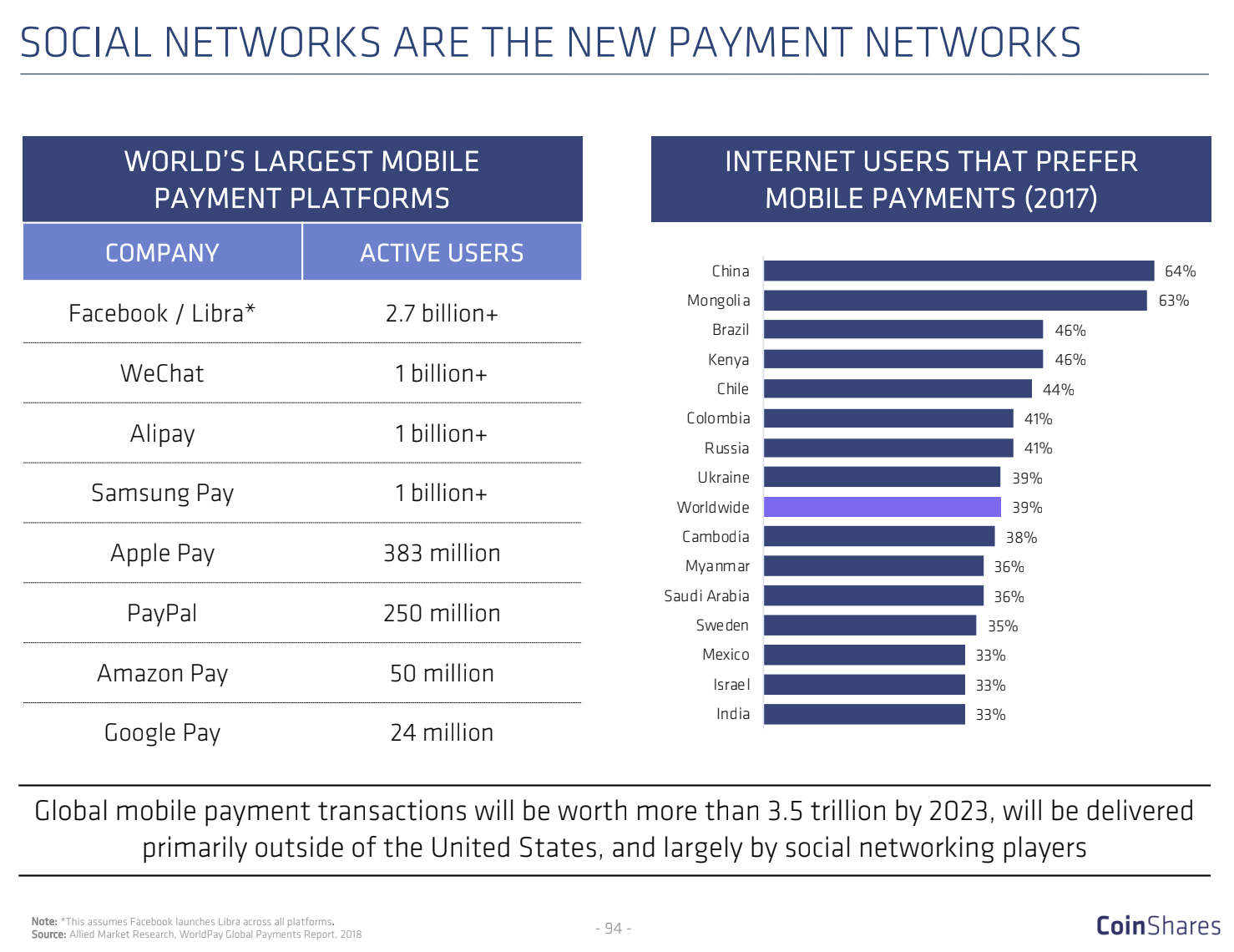 The Year 2020 Cryptocurrency Outlook: Speculators Rely on Bitcoin ahead of Blockchain [coinspeaker.com]

Bitcoin comes first, ahead of blockchain, for speculators who look towards the year 2020 cryptocurrency situation. Its apparent several platforms have received support funds to create enterprise blockchains which mostly have launched out in 2019. However, the interest of speculators for such projects has waned out as they look towards fresh ideas on tokenization and cryptocurrency. This is a result of the shift in focus to the development of native cryptocurrency given rise to advancement in the decentralization of blockchain as many enthusiasts foresee a change in trend.

Heath Tarbert, the Chairman of the US Commodity Futures Trading Commission (CFTC), said at a conference yesterday that the country should increase its involvement in digital currencies and blockchain. He also called for action in terms of regulatory clarity.
“We have a situation where stablecoins and other [digital products] could be regulated by 51 jurisdictions plus the federal government. I think that if we’re really going to lead, we should give some careful thought – and this is really a question for Congress, as well as others. You see other countries starting to make inroads in this area, and so as a regulator, I want to at least create an environment where innovation can flourish, and whatever risks there are, we’re able to mitigate those.”

The South China Morning Post reports that the Chinese People’s Liberation Army could start rewarding its soldiers with cryptocurrency, according to the official military newspaper PLA Daily. The article states that such a reward system would help to improve “human resource management.” Soldiers would acquire or lose tokens based on their daily performance.

More than 10 years living in the world of Bitcoin has shown us that there is a long road ahead for Bitcoin developers, and BIP 324, created in March 2019, could be the next important step on that road. The BIP was authored by Switzerland-based Bitcoin developer and cofounder of Shift Cryptosecurity Jonas Schnelli to help address a perceived concern around the messages exchanged between Bitcoin peers.