The Federal Reserve Board Chairman Jerome Powell has said that the Fed is not developing a central bank digital currency (CBDC), but it is conducting its own research to evaluate the benefits and limitations of such an initiative. On the other hand, Edith Cheung, partner at blockchain-focused venture capital fund Proof of Capital, believes that China will launch its digital currency within the next six to twelve months. A CBDC by a large economy will be an interesting development.

A Glimmer of Hope Emerges As Bitcoin Price Rises Above $8,100 [cryptoglobe.com]

According to a report published in TheStreet at 09:30 EST (14:30 UTC), shortly after the U.S. markets opened on Wednesday, the Dow Jones Industrial Average (DJIA) was falling “after China condemned a U.S. Senate resolution supporting human rights in Hong Kong, while President Donald Trump threatened to boost tariffs if Washington and Beijing are unable to negotiate a near-term trade agreement.”

Does Recent Price Action Indicate That Bitcoin Is In An Echo Bubble? [zycrypto.com]

Bitcoin’s price is being dictated mainly by the bears, as it continues to remain under selling pressure. The top coin is in its third consecutive week in the red and has dropped more than 13 percent over the mentioned period. BTC’s price was dealt a big blow after it broke key support at $8,200 after tapping $10,000 late last month. Owing to this drastic movement, popular market analyst and hedge fund manager Mark Dow now warns that bitcoin is in an echo-bubble.

Sebastian Sonntag, the CEO of LocalBitcoins, a leading peer-to-peer (P2P) Bitcoin (BTC) exchange, reveals that the platform consistently adds around 135,000 new users each month. He says LocalBitcoins aims to “bring Bitcoin everywhere” by making services available to as many Bitcoin traders as possible throughout the world.

U.S. government debt yields extended their slide on Wednesday, as China trade tensions and fears of an overvalued stock market drove investors into the relative safety of bonds.

Looking at the 4-hour chart, Bitcoin has sustained a downtrend in a falling wedge pattern. As long as the pattern support remains intact, Bitcoin has the potential to correct higher in the coming sessions. However, as far as the MACD is concerned, bearish dominance could last longer. To completely avert declines below $8,000, Bitcoin must rise above $8,250 in the near-term.

Adequate Bitcoin storage should be a top priority for any holders of the cryptocurrency. However, with so many different options available to users, how do you decide which is best for you? Different Bitcoin storage methods can enhance privacy or a users’ monetary sovereignty. However, less desirable options can also present an array of security risks too.

Veriphi publishes the most complete analysis of 25 software wallets and explained each one of the 48 different features that we took into account.

Nevertheless, the analyst mentioned an alternative scenario, wherein price manages to close below $6K. Such a move, as BJ stated, would shift bitcoin’s bottom target towards the $4,200-5,200 range. Earlier, the same area behaved as a stiff resistance zone for the cryptocurrency when it was bouncing back from December 2018’s $3,100 bottom level.

According to the latest Coinmetrics report, Bitcoin recorded consistent growth in terms of Bitcoin fees for three weeks straight. However, the fees recorded a stark decline of over 30 percent the following week. Ethereum faced a similar situation, but its fees only dropped by by 7.3 percent. Bitcoin raked in daily fees of over $241K, whereas Ethereum garnered $85.1K, on average.

According to the report published today, November 20th, $400 million of all processed transactions using Ripple’s XRP cryptocurrency have links to illegal activities. This represents 0.2% of the entire transaction volume of XRP. The co-founder and Chief Scientist of Elliptic, Dr. Tom Robinson, noted that most of those activities are associated with scams and thefts, and fewer involve selling and sharing credit card details:

On the question of why PayPal became the first of 28 members of the Libra Association, Schulman explained their desire to work on the project but took a route towards “concentrating on their roadmap outside Libra.” He said,
“You know, we think if we focus on our own roadmap, we’d be able to advance financial inclusion faster than if we put all these resources against Libra.”

Bitcoin Cash Keeps Dropping, Can The Bulls Defend The Price At $240? [coinidol.com] 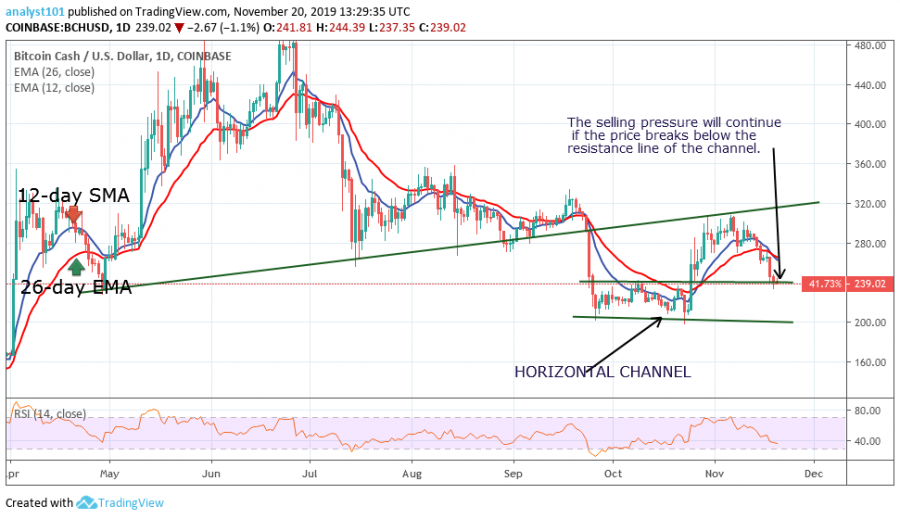 The bulls are aggressively defending the $240 price level as the market moves up to make a retest. A retest means that price is likely to continue in the direction of the prevailing trend. Bitcoin Cash will drop if the bears succeed in penetrating the price at $240. However, if the bulls hold on to the price at $240, the market will rise to retest the resistance at $310. Presently, Bitcoin Cash is trading below the $240 price level as the bears overwhelm the bulls. It appears the price will find support at $200.

China Launches Blockchain Standardization Committee as it Warms up to New Trends [cryptobriefing.com]

China has announced the launch of a variety of technical committees for standardization of several industries. The committees will focus on the sharing economy, children’s products, and, most notably, blockchain technology. Since October 2019, China’s President Xi Jinping said that he wanted his country to “take the leading position in the emerging field of blockchain.”

According to cryptocurrency trader “The Moon,” Bitcoin has a 70 percent chance of a bullish breakout if the aforementioned pattern gets confirmed.  That said, Bitcoin would need a huge buying volume for this scenario to translate into fruition. Trading vet Peter Brandt noticed that the XRP/BTC pair was about to complete a diamond bottom. However, Ripple’s native token failed to rally even before the much-awaited SWELL event that took place on Nov. 7-Nov. 8.

Is #Bitcoin forming a "Diamond Pattern"?

Personally I'm not too sure about it, but let me know below what you think! pic.twitter.com/5xoVzt5Ubu