Bitcoin (BTC) closed the week down at $6,900 having lost around $1,400 or 18.72%. Monday got off to a disastrous start for the bulls, with a selloff in the Asian market session, losing another 5.5% finding lows of $6,500 before the bulls responded with a 13% swing back over $7,300. As has been witnessed recently, Bitcoin has continued to dictate the valuation across the cryptocurrency market as a whole. Notably, Ether (ETH) briefly traded around $130, but has since recovered and is now attempting to retake $150, up around 6% for the day.

Days after Bitcoin’s (BTC) capitulation out of the previous local market structure, the inevitable relief rally has started coming in. But after about 12% of upside, BTC has encountered the first line of resistance on the way up. And placed within the larger downtrend that has formed, we should be cautious about expecting more upside.

Bitcoin Price May Be Ready To Rally According To Social Media Metric [newsbtc.com]

Bitcoin price has been steadily falling for weeks now, ever since the crypto asset experienced its third-largest one-day surge in its short history on the heels of news that China would be supporting the blockchain technology that the crypto asset is built on. However, Bitcoin price may be ready to rally once again, according to a social media metric that hasn’t spiked this strongly since the day the China crypto pump began.

Data from @TheTIEIO shows that bitcoin tweet-sentiment is the highest it's been since the Xi Blockchain announcement. pic.twitter.com/bAZdE2RWfg 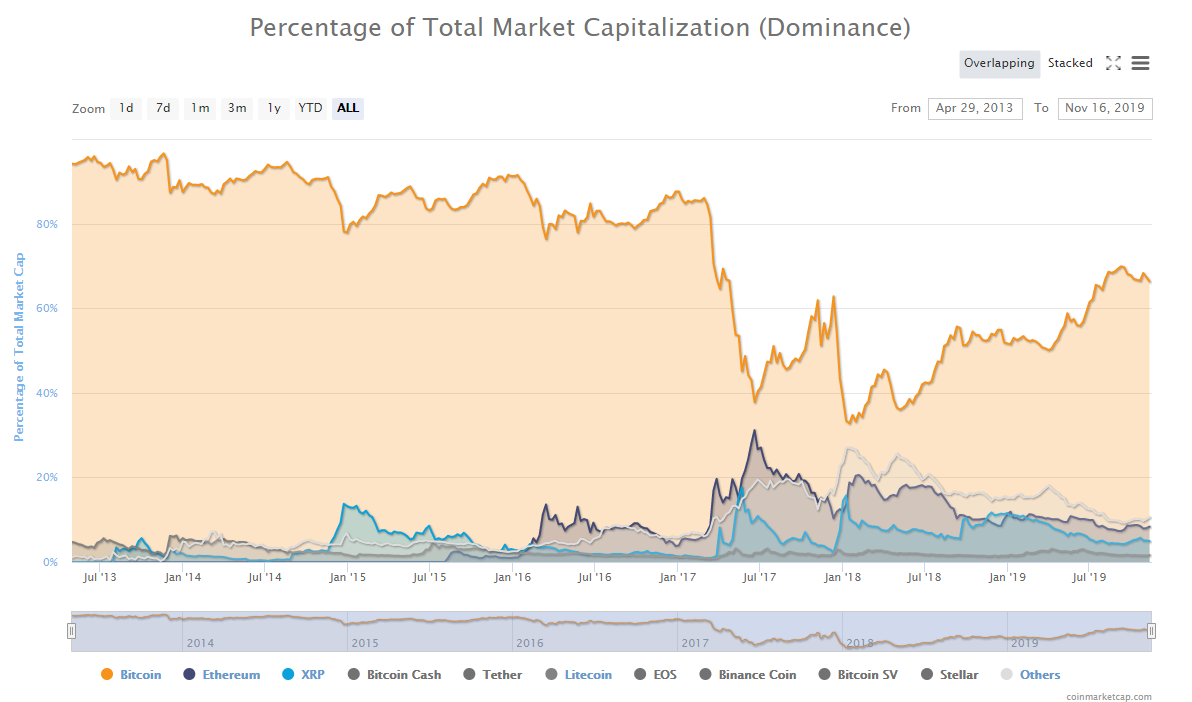 For the second year in a row, cryptocurrencies underperform during the past few months of the year, even though seasonality had been favorable for the past few years. The first half of 2019 had been fruitful as the market rebounded from extreme oversold conditions. Given that it performed poorly since June, does that mean we had just technical buying? We’ll try to answer this question as well as some interesting things we think should be watched in the near term.

Luke Martin of Venture Coinist explains, the price of Bitcoin has often dropped in the days leading up to the event. “Next BTC CME expiration is on Friday 11/29. I charted out price returns before & after expiration since the contracts started trading. Takeaway: Generally experience selling pressure before and positive returns after.”

•Last 4 months price sold off before with positive returns after

•If negative return 1-week before expiration, 73% of the time returns are positive 1-week after pic.twitter.com/9SSrINaU1b

Recently, Mr. Greenspan mentioned the situation at the Bitfinex exchange, emphasizing the long and short positions for Bitcoin (BTC). The data from this service clearly shows that there is a bullish movement building right around the corner, with sell (short) orders plummeting on the exchange. Mr. Greenspan also pointed out that the buy (long) positions for BTC/USD spiked yesterday to levels not seen since February. The sell (short) positions for BTC have dropped off and are continuing to fall, reaching an all-time low.

It's very clear what the market thinks of this latest selloff!

Bitcoin buy positions (blue line) are at their highest level since February, while bitcoin sell positions (orange) are near their lowest level ever.

Dissecting Bitcoin’s Death Crosses from the past: BTC could mirror 2015 setup [ambcrypto.com]

With Bitcoin hovering around the $7,200 level, it should be noted that its journey thus far has transitioned from being cautiously optimistic to a roller-coaster ride. The future, however, looks to be stuck in limbo until Bitcoin makes its next move.
The bearish scenario that is looming over Bitcoin is the ‘Death Cross.’ Death Cross is when the 50-day SMA crosses below the 200-day SMA. Infamously, this indicator lit up before major economic downturns in 1929, 1938, 1974, and 2008. It is also important to note that there were times when the death cross appeared, but proved to be a false indicator.

However, one analyst pointed out that it was too early to be optimistic about Bitcoin, citing a convergence of bearish factors that might suggest that the cryptography market would be more painful. Even so, there are still analysts who keep their heads up. Velvet is one of those experts who called the ongoing drop from $8,000 to $6,000 half a month before this drop. Regardless of his bearish inclination, he has tilted upward, perceiving that the cards are starting to play for Bitcoin bulls.

According to a document signed by District Judge P. Kevin Castel at the New York Southern District Court on Monday, Durov’s deposition should take place on Jan. 7 or 8, 2020, at a location “agreed upon by the parties.” That would be a little more than a month before Telegram is scheduled to meet the SEC in court to dispute the legal status of the gram token, which the SEC considers an unregistered security. Telegram vice president Ilya Perekopsky, who was reportedly responsible for communications with investors during Telegram’s $1.7 billion token pre-sales last year, should also be questioned on Dec. 16 in London, the order states.

According to a report from local media Korea JoongAng Daily, the National Assembly’s national policy committee of South Korea has passed a bill which categorizes cryptocurrencies as digital assets. Per the Financial Services Commission (FSC), this move is going to help cryptocurrencies become more transparent, while also legitimizing investments in them. Moreover, this is also something that’s supposed to prevent money laundering, set ground rules for financial transactions and help virtual asset businesses, in general.

On Monday, the cryptocurrency-accepting online travel agency and metasearch engine Travala announced a strategic partnership with the firm Booking.com. According to Travala the collaboration adds Booking.com’s accommodation listings to the Travala portal, adding 90,000 destinations to over 230 countries worldwide.

TokenSoft, a platform for financial institutions issuing blockchain-powered securities, today announced the launch of support for CommerceBlock, a public blockchain-based infrastructure enabling the distribution, exchange, and storage of tokenized assets and securities.
“The CommerceBlock solution provides issuers the ability to deploy a permissioned chain while leveraging Bitcoin’s proven technology stack. This provides issuers with the full control they need to meet their regulatory requirements as well as the scale they need to meet today’s market demands.”
– Mason Borda, CEO of TokenSoft

The crypto-verse is brimming with entertainment for those who look for it. From friendly banter to minor spats to full-blown tussles between crypto personalities, there’s never a dull day on Twitter. This time, it was Vitalik Buterin who became the target of several crypto personalities over different issues. However, Buterin took their”insults” sportingly, and crypto Twitter had a field day over the squabbles.

I got insulted by *two* major cryptocurrency figures today! People say fun things about me all the time, but I do think this is a bit of a record.https://t.co/pas4jLkPLkhttps://t.co/xw6fXXIla4